The 17th International Open and User Innovation (OUI) Conference took place last month at the beautiful city of Utrecht (the Netherlands). It was the fourth time I attended the meeting of this community and I was glad to see it’s growing. It was also nice to see that share similar research directions with some of the participants. I presented the methodology of the “Contribution Matrix,” based on a paper we submitted with Kevin Desouza at the IEEE Transactions on Engineering Management last June.

The OUI community started up during the early millennium, mainly around the seminal work Democratizing Innovation by Eric von Hippel (2005), as well as the book Open Innovation by Henry Chesbrough (2003). Its framework is summarized by the following model (Raasch and von Hippel, 2012):

The conference was hosted by the University of Utrecht in one of the most historical buildings of the city and addressed a large variety of themes, ranging from Crowdsourcing, Institutions, Healthcare and Toolkits to OUI Platforms, Governance and Organization Design.

In brief, there are two major thesis here. On the one hand, indeed users do innovate (von Hippel, 1977). On the other hand, enterprises could do more if they open up their boundaries (Chesbrough, 2003). On this basis, numerous studies explore the specifics of each innovation paradigm. In the Open Innovation framework, enterprises have to see beyond their walls and exchange knowledge and ideas with others to integrate them into new products and services. In the User Innovation paradigm, innovations emerge from lead users, who freely share them with their peers: in theory, use-related innovations come from users while technology-related ones come from manufacturers (von Hippel, 1994).

Overall, most presentations by young scholars were interesting, illustrating important theoretical ambitions. Interestingly, there were many presentations on developer innovation, too. For instance, developers in Python still come from different backgrounds, as one can find among them both university graduates and self-taught developers (Wang and Tambe, 2019).

Another presentation I particularly appreciated was about a seminar organized by and for cancer patients along with courageous health professionals (Sanden et al., 2019). The study described an active learning experience, where the identities of both the patients and the professionals were challenged. This presentation made me think about the epistemological discussion about standard and contemporary sciences we open in our recent collective book, mainly in what concerns the formation of identities (Chrysos and Gentes, 2019). That seminar surely is an initiative to follow up.

The keynote speak by physicist Christoph Stampfer was also very interesting. It was about the App phyphox he developed with a small team. Phyphox is an open source application which takes into advantage the hardware of a smart phone to operate elementary Physics experiments. Unlike consumers, phyphox developers didn’t content themselves with pre-existing Physics Apps. They looked under their thumb to see the set of instruments inside the smart phone (accelerometer, magnetometer, gyroscope, light sensor etc.) and do something on their own with that. Initially developed for Stampfer’s own use, the App gathered an international techer community contributing new experimental protocols. Thus, students can have in their pockets a laboratory comparable to the ones disposed by schools.

It was interesting to see in this particular field what I describe in my thesis as the “User-Developer-Entrepreneur” (UDE) phase: today some users ask for customer support, just like consumers. Yet, since providing customer services is not interesting for Prof. Stampfer himself, an entrepreneurial schema has to be invented for the community to expand. The tiny group of UDEs has to give its place to one of Developers-Entrepreneurs (DE) putting aside their personal preferences to serve the consumers (see figure bellow) (Chrysos, 2013, 2015): 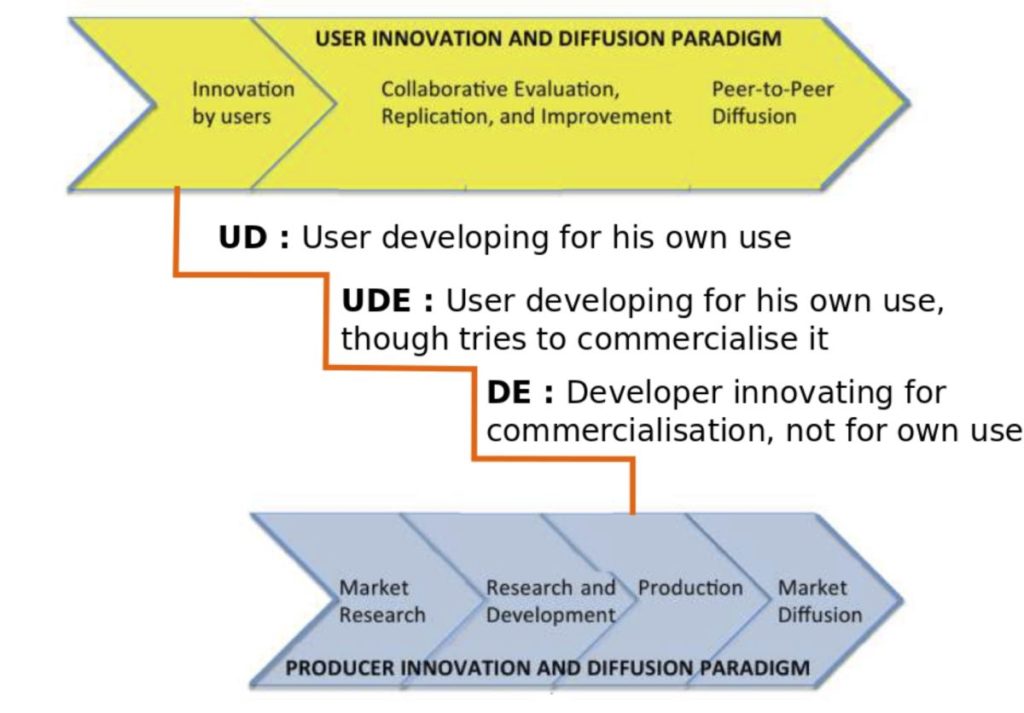 There also was a surprising presentation by an economist, who said that most of the dimensions of user innovation revealed by the research of the OUI community (e.g. on motivations) would just be ignored once an econometric model gets established. It was interesting to see, however, how econometric models are set up, taking into account what is there, testing parameters, cutting off others to finally keep those one just can’t cut off, as well as the relevant ones.

The important news, however, is that new horizons for innovation policies open up at an international level. The OECD Oslo Manual on the measurement of innovation has recently broaden its scope, now talking about innovating “units.” Thus, governments should take into account household innovation for the design of their future policies, too. This evolution unfolds further research perspectives, including the potential for developer innovation to become more visible. It came after decades of research on the field, as well as years of discussion of prominent members of the OUI community with OECD analysts, among others. I’m quite proud to have contributed in those discussions with the presentation around my book at a humble seminar at the Directorate of Sciences, Technologies and Innovation of the OECD here in Paris some years ago (Chrysos, 2016).

At this conference I presented a methodology on analyzing emergent technologies, of which an early version I had already discussed with the colleagues of the Center for Organizational Research and Design during my visit at the ASU a couple of years ago. The standard method of analysing technologies in this community is the Design Structure Matrix (DSM) (Baldwin and Clark, 2000; Steward, 1981), identifying and representing the relationships between the different features of a technology. However, “when the underlying technologies are rapidly changing and becoming more complex” there’s a need for better solutions (Colfer and Baldwin, 2016).

So, the presentation of our study (which you can download here for free) was based on the paper we elaborated with Kevin Desouza, whom I met at ASU. In fact, a set of dimensions we had tackled with Kevin before submitting our paper at the IEEE Transactions on Engineering Management also came up at the discussion that followed my presentation, mainly on the difference between the DSM and methods based on bipartite graphs (Danilovic and Browning, 2007; Suh, 1990). In addition, we discussed about the process of standardization of nano-satellites and the work I did in collaboration with Nikitas Chronas and Apostolos Masiakos that I presented last year at CalPoly and at the NASA (Chrysos et al., 2018a, 2018b). I also had the occasion to meet academic engineers interested in the nano-satellite phenomenon from the standard space industry perspective and exchange on historical examples of industrial emergence I studied in my thesis, such as the early era of the PC.

Other than that, I took the time to hang around Utrecht and I also had the chance to climb the famous Dom Tower. I walked a lot along the wonderful canals which used to turn the entire city a major port before Amsterdam becomes an even more important one. Utrecht is probably lucky not to have an airport, as, despite its beauty, it’s not packed with tourists, and its residents can enjoy a high quality of life. I met Timo for a beer who told me about his hands-on innovation experience in the banking sector. He got back to Utrecht and found this job he really likes, just three weeks after graduating the Master “Innovation in European Business”.

Overall, the organisation of the conference was perfect and I was very glad to see that the community is doing well. The next OUI conference will take place at Aachen, which may be the first German town in alphabetical order.

Chrysos, P. (2016). Foggy economy: the challenges of the expansion of emerging technologies and the innovative action of developers.