Last month, Sep. 7, I was at the NASA Glenn Research Center in Cleveland (Ohio), a place where aerospace technologies are developed. I participated at the NASA Academy of Aerospace Quality Workshop that took place at the NASA Safety Center, situated in the campus. It was a very interesting workshop on current evolutions in aerospace research and shared my work on the design of Cubesats.

There, one could learn much about a variety of topics, ranging from the current turn of space exploration from planet Mars to the Moon, to the international institutional framework for peaceful uses of outer space, as well as about the activities of the Glenn Research Center itself on small spacecrafts.

To a large extent, the workshop addressed the current evolutions in space technologies mostly in relationship with the development of small satellites or Cubesats – a research field in which I’m also involved since more than a year now.

Most presentations at the workshop – such as the one by Eduardo I. Ortiz-Riviera or the one about an Open Source Cubesat from the University of Utah – outlined the experience of concrete projects. In addition, a set of studies addressed the field of space technologies from the perspective of the application of well-known managerial doctrines – such as Design Thinking or Six Sigma.

The diversity of the studies presented is linked with the current shifts that take place in the field. Aerospace Industry is governed by a set of very rigorous and precise quality methods and techniques. Contrary to the car industry, for instance, aerospace is much about singular projects, which may often cost more than $1 billion. In such a context, there is no place for errors and this fact is reflected on the established methods for quality control. For instance, there can be no “trial and error” logic, i.e. finding the right solutions after multiple failures, especially when human lives are involved.

However, such rigorous methods are often rigid, too. Thus, the integration of new techniques, approaches and technologies by this industry is more than incertain. Yet, new technologies require long periods of exploration and experimentation until they become efficient. (For a typology of the phases preceding the establishment of a new technology, see the 2nd part of my Ph.D. dissertation).

In any case, compared to the current procedures of the aerospace industry, the development of nano-satellites and other nano-scale spacecrafts is another planet!

Beginning as an educational tool almost 20 years ago, the development of Cubesats has expanded to a wide range of research and commercial missions. However, emerging methods of design and quality assurance can be radically different from the ones we used to know.

An original approach: lessons taught from the development of Cubesats

The study I presented, of which a first version had already been shared at CalPoly last May, had a different approach. My collaboration with two of the developers of the UPSat, A. Masiakos and N. Chronas, wasn’t limited in the description of the technical specificities of their satellite. Neither did we apply some ready-made doctrine to study its development process. Instead, we begun our study by analyzing the source code of the satellite, having as a goal to draw lessons for satellite miniaturization in general. In the end, we expressed those lessons in a generic way, so that they can be useful to other sectors as well, beyond the aerospace industry.

My interest on lessons that often “hide” in the development of new technologies was not new. During my Ph.D., operating an “archeology of the present” (1st Part), I identified the action norms of the developers, while in another study I suggested a breakthrough from Network Theories drawing from the examination of the design of the TCP protocol.

More over, in the study presented at NASA, focused our study on a very precise part of code of the UPSat. Using the Contribution Matrix, a method I introduced last year, I had found that a specific part of this code, namely the “ECSS_Services”, had served as a backbone for the overall project. Nikitas and Apostolis, my two co-authors, had played a major role in the development of this part.

A Generic Framework for the Miniaturization of Satellites

Thus, “A Generic Framework for the Miniaturization of Satellites” resulted from an “archeology” of the development of the UPSat nano-satellite. As I’ve suggested in one of my studies on epistemology, generic conceptualization can play a crucial role in interdisciplinary research.

In the UPSat case, to write the code of the particular part, developers had been inspired by a standard of the well-established aerospace industry. However, they didn’t apply the standard as such – it would be impossible to do so at the nano-scale!

Consequently, the goal of our study has been to identify and name what they did in terms of operators, suggesting generic concepts to describe the journey from one scale to another.

Our Generic Framework describes thus the required operators for passing from the standard scale to the nano-scale.

Such a transposition is made possible through the use of three operators:

– Adhere to the standard characteristics.

– Ignore the standard characteristics or 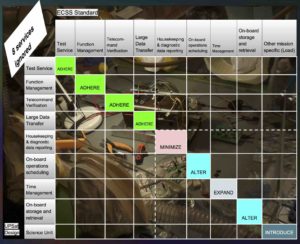 You can download the study as presented at NASA here and you can also find all the presentations of the workshop here.